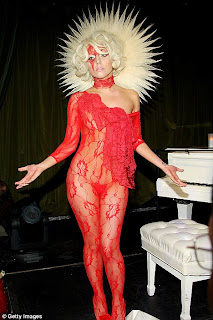 Pop star Lady GaGa has changed a lot since I first began blogging about her in April of 2009. My initial interest in her as a pop culture figure resulted from the heavy use of "MK" symbolism in her work which drew comparisons to themes associated with Project Monarch. Since then her videos, photos, and live performances have expanded in ways I couldn't have predicted. It seems that the more fame and notoriety she received the more Esoteric her work became.

My first real deviation from exploring the mind control elements in her work came with Gaga for Death in November of 2009. In that post I explored the reoccurring theme of death in her work. Gaga for Death only scratched the surface of the Esoteric themes as Lady GaGa as a pop culture force was still forming and expanding at that point.

In Gaga for Death Continued, I expanded on my inquiry on the reoccurring theme of death in all things GaGa. This time I touched on her odd obsession with dead pop icons such as Marilyn Monroe and Princess Diana and her use of imagery associated with Anubis. Anubis was the patron of mummification and the dead on their path to the underworld.

In Going Green Madonna found her way into the equation as I explored the Goddess symbolism associated with her. The GaGa and Madonna comparisons continued in Gaga for Death 3 and Gaga for Death 4 as I explored their strikingly similar images. Although the comparisons are there, I found that while Madonna's symbolism represents positive aspects of death Gaga's use of ravens point to the negative aspects of death.

As time went on the death scenes continued in literally every single one of Lady GaGa's videos. I stopped exploring the symbolism as I felt the trail of death was leading no where.

Finally in Eye of the Beholder things began to change when Lady GaGa appeared on the cover of V magazine with designer Marc Jacobs dressed as Lady Liberty. 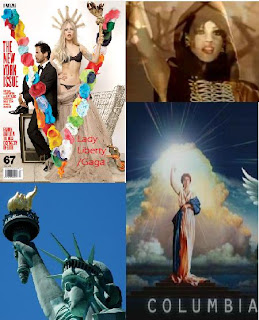 Lady Liberty is one of the many representations of the universal Mother Goddess figure. She is connected to the other torch carrying Goddess Columbia.

Up until this point I had never fully considered Goddess symbolism in Lady GaGa's work although many signs were there. For starts, her fans, or "little monsters" as she calls them, refer to her as "Mother Monster". The universal Goddess figure is also a universal Mother figure. Mary; "the Madonna"; Our Lady. Vogue magazine even referred to her as "Our Lady of Pop" in a recent article. Another fan created nickname for Lady GaGa is Lady GaGalupe, a play on Our Lady of Guadalupe. The pop phenomenon even sells Lady GaGa prayer candles to her millions of fans.

Throughout her career Lady GaGa has often been compared to Madonna. The Goddess symbolism associated with Madonna is the most blatant in pop culture. For starters, her name itself is symbolism as it resonates "the Madonna".

Besides that obvious comparison, Madonna has also represented many other Goddesses as a pop culture icon. One of the most frequent references by researchers is her connection to Isis. In an episode of the always symbolic Hannah Montana they even featured a character who obviously represents Madonna but they use the name Isis. 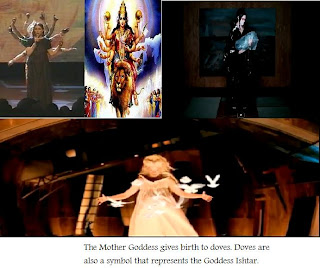 In the music video for the song "Cherish", Madonna continues on with her role as the Madonna/Mother but she also resonates many other Goddesses in the process. In the video she is one with the sea as she nurtures all of the creatures around her. The sea and seashells are important symbolism associated with many Goddesses, most notably the Goddess Venus. 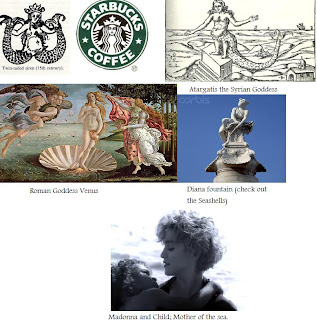 One Goddess who is often overlooked when it comes to Madonna is the Goddess Ishtar. In her early years Madonna was known for having a controversial sexual image. Her song "Like a Prayer" even equates sexuality with religious ecstasy. This resonates very strongly with Ishtar, known as the Mother of Harlots, who is known for sacred prostitution. Ishtar was the archetype to other high ranking temple priestesses which is similar to Madonna standing with younger pop princesses such as Britney Spears, Christina Aguilera, and Lady GaGa herself.

Another Goddess resonating pop star is Kylie Minogue who decided to get right to the point and blatantly named her latest album Aphrodite. 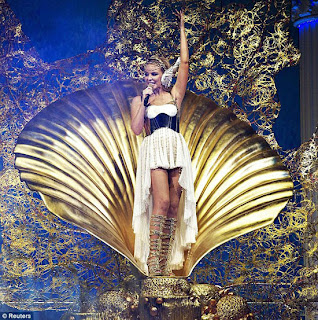 Nice seashell.
In 2003 Britney Spears performed at the MTV Video Music Awards with Madonna. The ritualistic nature of this performance, including the checkerboard designed stage and the 13 steps, have been pointed out by many researchers. It seems to be agreed that the performance was an initiation to raise Britney Spears, and secondarily Christina Aguilera, to a position within the order - a torch passing if you will.

After the performance took place Britney's videos became more violent. In "Toxic" she killed one of the main characters, in "Everytime" she herself died and was reborn. Previously she had played a fembot in Austin Powers. In the scene she attacked Austin with her breast, a scene Lady GaGa would recreate years later.

Soon after Britney Spears would experienced a public meltdown. Many researchers, including me on Youtube, have attributed this to a break down of the alter system created through trauma based mind control. During her breakdown she shaved her head and made headlines. Freeman of the Freeman Perspective pointed out that she shaved her head in a beauty salon called Esther's. As you may remember, Madonna announced earlier that year that she would be going by the name Esther. The name Esther refers to Queen Esther who was named that in honor of the Goddess Ishtar. Britney was also wearing a Star of David/hexagram when she shaved her hair. Britney later announced that she was leaving Kabbalah, a belief system she was involved in under the guidance of Madonna. The news of this reportedly upset Madonna and the two had a falling out.

It appears that Lady GaGa would pick up where Britney Spears left off. As Britney Spears fell from grace as the world looked on, Lady GaGa began topping the charts with songs about partying, fame, and the demise of a star which seemed to mirror Britney's real life drama. As GaGa rose to become the most relevant pop star in the world, her videos picked up the violent and death symbolism that Britney left off with. GaGa's image seem to mirror Madonna's but everything she picked up from Madonna she expanded it and eliminated the sexuality and added violence instead. 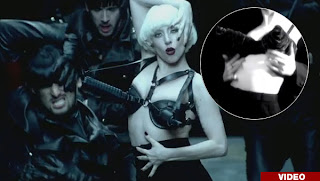 The connection that flew right over my head in my early inquiries into Lady GaGa's public image is the fact that all Goddesses are not pure and angelic. There are Goddesses of love and death. In fact, many of the Goddesses we have already discussed were not to be fucked with. Ishtar and Diana were both Goddesses of War. In fact Madonna (the pop star) even got a little blood thirsty in her later years. Madonna expressed war and death in videos such as "What It Feels Like For A Girl", "Die Another Day", and "American Life". 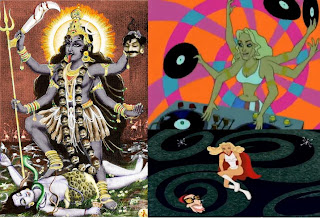 Hindu Goddess Kali and Madonna in "Music".
Rapper Lil Kim has been making news later for her very public feud with newcomer Nicki Minaj and her verbal assaults on everyone from P. Diddy to Drake to Lil Wayne. The Queen Bee is ready for war. Lil Kim is yet another artist who represents the Goddess. 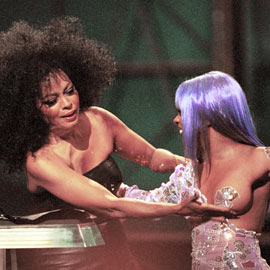 "It's the Goddess, I'm more than an artist..." - Lil Kim, Hot Tottie
Lil Kim is known as the "Queen Bee". The Queen Bee is yet another term that represents the Mother Goddess figure.

"The cultivation of honey was a sacred charge often imbued with ritual symbolism and associated with the mother goddess, whose nurturing protection of mankind was symbolized by the the abundance of honey provided to bee society under the reign of the queen bee." (http://symboldictionary.net/?p=2459)
The picture above is of Lil Kim and "Diana" Ross at the 99 MTV Video Music Awards (it's always the MTV Video Music Awards when these rituals take place, isn't it?). As you can see her breast is exposed but look at the actual breast. The pastie on her breast is a seashell. She is also wearing the royal color purple. On stage with the Queen Bee and "Diana" that night was "Mary" J. Blige. Oh, how cute, a triple goddess.
Years later Janet Jackson would expose her breast at the Superbowl. On her breast was a solar design representing the God. You will often see the God and the Goddess unified. Goddesses are often shown with one of their breasts exposed. Is Justin Timberlake a Son/Sun figure? He has also collaborated with "Madonna". 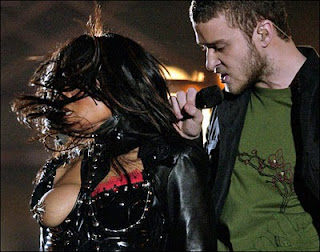 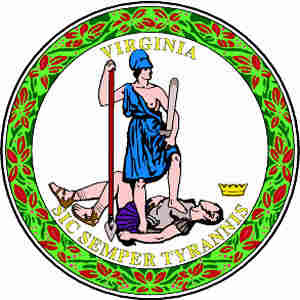 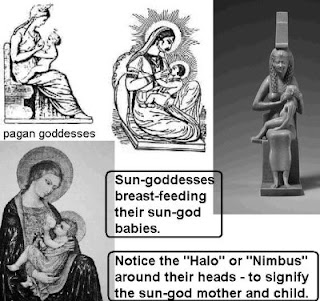 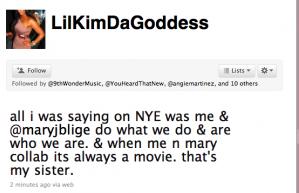 "Who the fuck want war?" - Lil Kim, Black Friday
In her music video for "Alejandro", Lady GaGa seemed to fully embody Ishtar. In the video she is surrounded by men wearing women's clothing. This is very similar to Ishtar as transvestism was practiced in her time of sacred prostitution. Sexuality also plays a huge role in the video. Later the men are shown as soldiers and war scenes are shown. Ishtar was a Goddess of war. 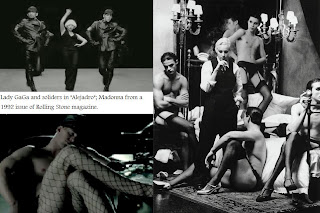 Lady GaGa would continue her war path as she led the fight to repeal the Don't Ask, Don't Tell policy. 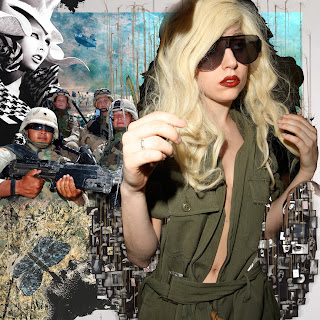 Collage by Mark Schaer
I was willing to overlook Lady GaGa's similarities to Ishtar until she arrived at the recent Grammy Awards in an egg. According to Babylonian legend, a huge egg fell from heaven, landing in the Euphrates River. The goddess, Ishtar broke out of this egg. Later, the feature of an egg nesting was introduced, a nest where the egg could incubate until hatched. A "wicker" or reed basket was conceived in which to place the Ishtar egg. 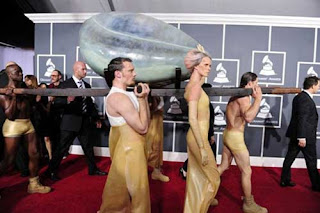 All of this brings us up to date to Lady GaGa's latest music video "Born This Way" which premiered just a few days ago. The beginning of the video immediately brings to mind Gnosticism as GaGa appears to be playing the Gnositic Goddess of Wisdom, Sophia. In the video GaGa speaks of a split which gave birth to good and evil which is similar to Sophia mirroring God and creating the material world and the Demiurge (demigod). She also expresses the need for evil to protect good. The music videos stance on good and evil brings to mind the ideology of the ruling elite and the idea that good and evil must coexist to create balance. It also reinforces GaGa's Goddess role as she represents the Mother and the Goddesses of War and Death. She also speaks of a planet called GOAT (Government Owned Alien Territory) which brings to mind the Baphomet. In an interesting twist "Baphomet" rendered in Hebrew is בפומת; interpreted using Atbash, it becomes שופיא, which can be interpreted as the Greek word "Sophia", or wisdom.
So what does all of this mean? Matthew Delooze believes that celebrities are symbolic icons representing Gods and Goddesses that are worshiped by the ruling elite. He says that the energy extracted from pop culture events is used for multidimensional beings that rule this world. Christian site New Prophecy believes that the celebrities represent archetype's that will be used to bring about the Apocalypse. Although their stances differ on many levels, it is interesting that they both believe that the celebrities are mere representations for something bigger. What do you think?
Posted by MK Culture at 4:49 AM 16 comments