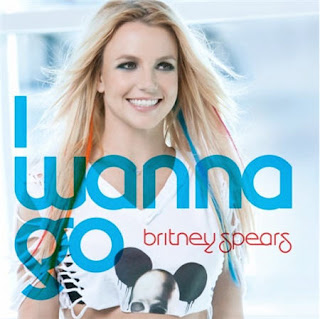 Recently the music video for the current Britney Spears single "I Wanna Go" premiered. The music video featured a narrative that mirrored the real life control over the stars life and public image.

When it comes to mind control, I have discussed Britney Spears more than any star. In my videos I have addressed her public meltdown in 2006 and 2007 and how the media's endless obsession with her gave us a glimpse at her many personalities, including her British alter, in Britney Spears and Nicki Minaj - Lost in Oz. Coincidentally, Britney Spears and Nicki Minaj have collaborated and performed together several times since I made that video. In Trauma Based Culture, I supplied more insights into Britney's suspected Dissociative Identity Disorder including personal first hand accounts of the stars memory issues and personality switches.

In the music video for "I Wanna Go", Britney rebels against the pressures of stardom by cursing out reporters and storming out of a press conference in a scene that paid homage to the cult classic Half Baked.

Britney wears a shirt that has a skull with Mickey Mouse ears. As we all know, Britney was groomed for stardom under the Disney machine as a part of the Mickey Mouse club with other stars such as Justin Timberlake and Christina Aguilera. Disney's role in Project Monarch is widely known among people who are aware of Project Monarch. It is said that many of Disney's amusement parks double as programming centers for Monarch slaves. Many of the themes within Disney films serve to reinforce the programming of programmed slaves.

The video continues with Britney indulging in many rebellious acts such as flashing her breast, getting frisky with a cop and breaking the paparazzi's cameras. However, the real action starts when Britney jumps on to a cab and uses her microphone to attack the paparazzi.

In a scene straight out of the 1984 action film Terminator, the paparazzi rises and it is revealed that they are in fact cyborgs. 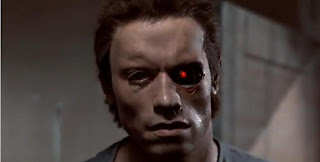 I Wanna Go
In Terminator, Arnold Schwarzenegger plays a cyborg created by the fictional artificial intelligence system called Skynet. Here's Wikipedia's description of Skynet.
Skynet is described as being a revolutionary artificial intelligence system built by Cyberdyne Systems for SAC-NORAD. According to Kyle Reese, Skynet "saw all humans as a threat; not just the ones on the other side," and "decided our fate in a microsecond: extermination." Skynet began a nuclear war which destroyed most of the human population, and initiated a program of genocide against the survivors.
As the video progresses, Britney is rescued by a character played by Guillermo Díaz. The two drive away from the cyborg paparazzi and have a good time until Diaz pours milk all over himself and it is revealed that he is a cyborg too.

This scene, like the entire video, mirrored Britney's real life. Diaz's character reminded me of the relationship she had with her former manager Sam Lutfi who managed her career (or lack thereof) during her breakdown. 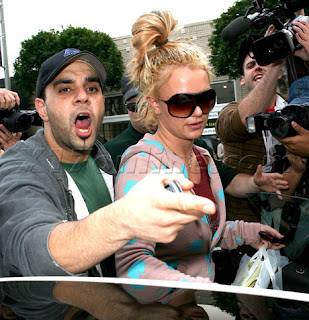 Since Britney entered rehab and her father stepped in to take control of her life by shoving her back into the spotlight, Sam Lutfi has been vilified in the press. Although it appears Britney trusted him, Britney's team, including her mother, have stepped in and accused Sam of drugging Britney and emotionally abusing her.
Personally, I'm not sure if I buy this story, especially coming from Britney's mother. It is known that when Monarchs remove themselves from people in their lives that know the access codes and triggers that reinforce their programming, their programming starts to break down and alters that are meant to remain hidden until brought out by a trigger or command by a handler, appear. Around the time Britney was with Sam many different personalities were evident. Compare this to Britney's heyday (1998-2004) when she appeared normal. When Monarch slaves are used daily (which Britney was; she released 3 albums in three years and toured endlessly), programming techniques are used on them daily which means they are most like electroshocked and hypnotically instructed daily.

The video ends with Britney waking up and realizing that the whole scene was just a dream. She tells Guillermo Díaz about it and he informs her that he loves dreams and seashells and proceeds to hand her a hand full of seashells. He then walks away with her and it is revealed that he is a cyborg too meaning Britney has no one to trust.

This scene may appear random but seashells actually play an important role in Monarch programming. Let's take at an excerpt from the book Deeper Insights into the Illuminati Formula, Wheeler by Fritz Springmeier which was released before Britney was even a star.


This is explained to the victim that the sea shells and the plants have the ability to hear, and that a sensitive occultist (programmer) can psychically pick up what the plants and sea shells hear. “MAINTAIN IT” --is a command to maintain the Vow of Silence “MAINTAIN IT & LISTEN.”-- a command to keep silent and listen to a command.
So in the end Britney is led to believe it was all a dream. She is programmed to remain silent and listen on command. The seashells are given to her to reinforce this programming in case she slips again. In Britney's real life she appears to be back under control. She rarely makes public appearances and is currently back releasing albums, videos and touring like she did at her peak. We also never hear from those personalities that made themselves known in 2006 and 2007.
In conclusion, the "I Wanna Go" music video is yet another chapter in the life of a pop star who has been controlled since childhood. Like many stars, Britney Spears exhibits signs of a severe personality disorder. These signs are ignored as her PR team and the huge corporations that back her create a story for the public of a woman who fell from grace only to be saved and exalted back into her position as a pop icon. If you are tired of believing the fantasy, I will leave you with the names of three key books to read, let the information marinate and come to your own conclusions. From there you can take it further and continue the research for yourself.

Thanks For The Memories by Brice Taylor
Posted by MK Culture at 7:36 PM 234 comments