Hopefully I'm not boring anyone with all of the Madonna talk lately. It's just that once you go there with her there's so much to talk about. After this entry and the final Magic Mirrors post I'll be done with her for a while and will be moving on to other stuff, maybe some males for a change, the ladies seem to be getting all of the attention, I wonder why. Anyway, with this post I will be further exploring symbolism in popular culture in relation to the Occult, Luciferianism, and Gnosticism. 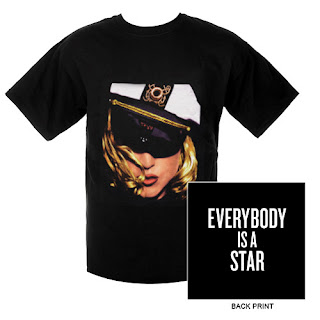 In 1993 Madonna embarked on what would end up being yet another controversial yet recording breaking tour. The Girlie Show featured some of her darkest themes up until that point. For the last performance of the show Madonna performed a cover of Sly & The Family Stone's "Everybody Is A Star" along with her own debut single "Everybody".

The title "Everybody is a Star" is interesting as it relates to the famous "Every man and woman is a star" quote from Aleister Crowley's Book of the Law.

As I stated before, Madonna uses themes in a very systematic way, so this was not the first time she used this theme. In her song "Spotlight" she sings "Everybody is a star" and just last year on her song "Beat Goes On", featuring Kanye West, she commands her audience to "Be the star".

The Girlie Show is full of symbolic presentations of Tantra, sexual rituals, and Magic.

She beings the song with "Erotica". When examined, the song "Erotica" is about mental possession. She performs this song in a ring that lights up with fire later on in the show. Ring of fire represent the ring of knowledge. Many rituals are done within rings of fire. I have meant to blog about this for a while. Check out Aaliyah's "4 Page Letter" video and Britney's "Womanizer" performances (Good Morning America, X Factor).

The second song she performs is "Fever". As she sings "You give me fever" and slowly takes off her blindfolds. The performance reminds me of Kundalini awakening of the base Chakra. Not just due to the sexual nature of the performance but also the burning sensation many say occurs during the activation of this Chakra. She also uses two male dancers who dance around her. Could her dancers represent the intertwining Serpents of Kundalini (it's important to note that Madonna practices Kundalini yoga).

As I stated here, Madonna's songs about dance are really about disassociation. The pose she is doing in that above picture from the performance of "Vogue" reminds me of out of body experiences as the eyes are usually depicted as leaving the body. This article explains how Out of Body experiences relates to Kundalini.

According to Vedas when kundalini is united with Lord Siva at the sahasrara Chakra, one who executes the union enjoys the Supreme Bliss.

Kundalini is a plexus, a reservoir of psychic energy situated at the base of the spine. Considered as the Energy of the Divine, it binds us when we project its energy into the world and yet, it liberates us when we return this energy to its divine origin.

Experiencing trance is in itself a divine feeling, but at the same time, it is very difficult for everyone to experience it, unless mastered through Vedic practices of meditation, yoga and spiritualism. Trance can be both voluntary and involuntary, but in both the effect is the same – disassociation of the soul from the body, and temporary detachment from everything related to body. It is neither the state of wakefulness nor that of the sleep. It is an intermediate state of being.

Most of us experience trance, albeit inadvertently, when we are absent-minded – probably absorbed in something but not passing through a cluttered phase of thinking. Children are said to be in brief state of trance (which is, in fact, high level of concentration) when they leave you unresponded (say, while watching television, playing a video game or simply solving a puzzle) if you call them.

Trance as a mental phenomenon has been studied experimentally too and is being considered as important in the way that it can provide meaningful insights into areas where we are stuck in our process in the mind-body medicine and/or simply “Out of Body Experiences.” A researcher has hypothesized that "stepping out of the body by will" can be performed in three different states:

1. in trance
2. iin the "half sleep state" – a moment before falling asleep
3. iin lucidity or the state of false awakening

"...go inside, all you'll find is inspiration; your dreams will open the door" - Vogue

Many people comment on Madonna's use of Marilyn Monroe iconography in her work but she has referenced Marlene Dietrich just as much and the Girlie Show was no different. In fact, she referenced Marlene twice in this tour. The first referenced was during the performance of "Express Yourself". In this performance she is referencing Marlene in Blonde Venus. Venus is very important to Occultist as the pentagram is believed to trace Venus' conjunction with the sun. Madonna symbolically used a pentagram in "Human Nature", a song that was written in response to the backlash she received from the 92/93 era. 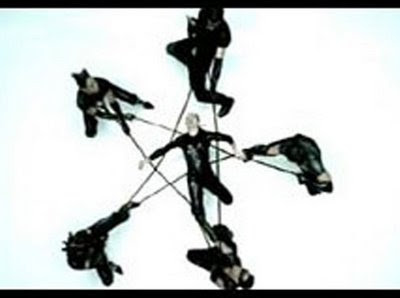 She referenced Dietrich again in "Like a Virgin" even taking it a step further and incorporating "Falling In Love Again" from The Blue Angel into the performance. This performance also plays with androgyny which is very important symbolism.

Anyway, to wrap it up on Madonna I would like to show another connection on Madonna's way of thinking and Crowley's. In 1991 Madonna told The Advocate "They digest it on a lot of different levels. Some people will see it and be disgusted by it, but maybe they'll be unconsciously aroused by it. If people keep seeing it and seeing it, eventually it's not going to be such a strange thing."

This quote is similar to Crowley's definition of Magick which is "Magick is the Science and Art of causing Change to occur in conformity with Will."

Madonna's quote also reminds me of Andy Warhol's use of repetition in his work which was believed to be social commentary on popular culture.

Madonna's new greatest hits cover was inspired by one of Warhol's Monroe pieces.

But anyway, moving along.

I wanted to post a few things about Goldfrapp. First of all we have the Peacock symbolism I mentioned here. 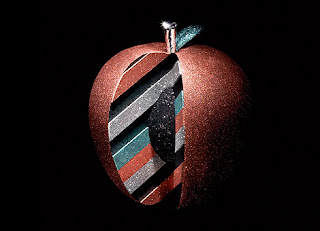 Another photo Goldfrapp used to promote Supernature. Clearly a bitten apple symbolizing eating from the tree of knowledge. I went into how common that symbolism is here.
Posted by MK Culture at 8:05 AM