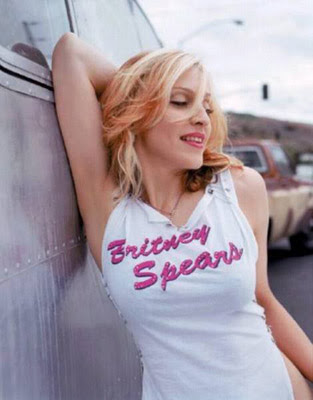 The relationship between Madonna and Britney Spears has been interesting. It has caught the public's fascination because never before have we seen a female icon paired with a younger female icon in such a public way before. Jean Harlow was never seen "passing the torch" to Marilyn Monroe, Aretha Franklin didn't publicly embrace Whitney Houston when she first emerged in the 80's, and Mariah Carey has been very bitter about Leona Lewis. So when Madonna and Britney kissed at the 2003 MTV Video Music Awards it was very shocking to a lot of people. Madonna and Britney Spears are two pop culture icons with symbolism all over their work. So of course when they teamed up there would be symbolism all their collaboration. As I said the first paring happened at the 2003 MTV Video Music Awards. According to MTV it was the 20th anniversary of their first award show back in 1984. The most famous performance was Madonna's debut of her then new single "Like a Virgin". As we all know it caused controversy and set the stage for the rest of Madonna's career and the career of other stars like Kylie Minogue, the Spice Girls, and of course Britney Spears. MTV played on this by having Britney open the show and recreate the iconic performance. 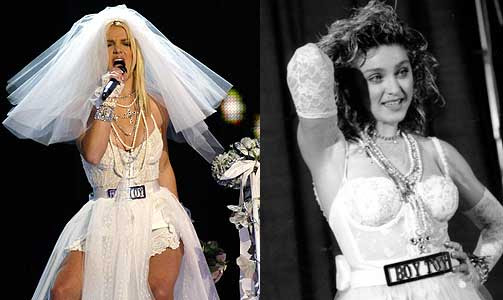 As most of you probably know the Illuminati loves blondes and uses blonde hair to symbolize illumination. That's why after a certain point all female stars go blonde. Nicole Kidman was not blonde at the beginning of her career, neither was Lindsay Lohan. Both Britney and Madonna wore blonde hair in this performance. It's also interesting that Britney Spears comes down from the top of the cake. 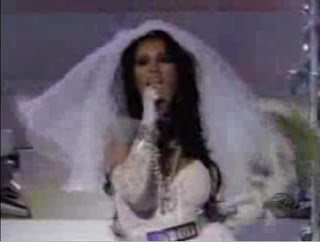 Next Britney's rival Christina Aguilera emerges from a lower section of the cake. Notice her hair is black. 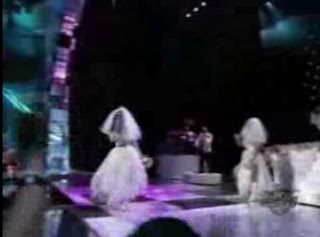 The two pop princess then perform "Like a Virgin" on a checkerboard floor. It's interesting that in the video for "Like a Virgin" Madonna gives herself to the lion/Sun God. Virgin sacrifice? Anyway, moving on. Next Madonna emerges from the cake in her Masonic Top Hat. To add to the Masonic symbolism she walks down 13 steps (count them for yourself), there are 13 steps to Masonry. In this performance Madonna is seen as the worshipful master (please research these terms and facts on your own). All of this is blatantly Masonic. Anyway, as they walk down the stage Madonna passes her top hat to Britney which was really the symbolic passing of the torch, not the kiss.

Britney is now the queen. The media are now presenting Madonna as a Goddess, which is something I will explore later. Christina's role in this performance was just a symbolic raising of her role within the order. I will not go further into this performance, we all know what happened next. 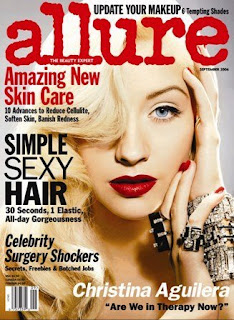 After this performance Christina was more frequently seen with her Illuminati blonde locks and red lip stick, often depicted as Marilyn Monroe. It took Britney a little longer to adopt to her position. Notice in the cover above the one eye symbolism I discussed in this post.
Watch this video to find out why.

But anyway, before all of that happened Britney and Madonna continued the ritual in the first single for Britney's album In The Zone. 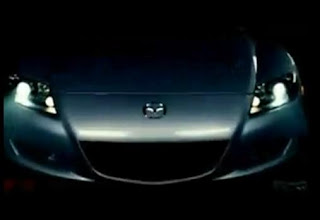 The video begins with Britney Spears driving a Mazda car. It's interesting they chose this car because the Persian / Hindu god was called Ahura Mazda(Mazda as in light bulb, so) the god of light, also known as Ormus, which is another name for the Preiure de Sion, which is a powerful group protecting the 13th Illuminati Bloodline. Of course there is the usual black / white symbols with their clothes. Basically throughout the video Britney is chasing Madonna which was symbolic of Britney chasing Madonna's status.
After Britney's breakdown she recorded a video for Madonna's tour. Click here to read my entry on that.
Britney later appeared with Madonna in LA to perform. Notice the black and white duality once again and Madonna's top hat.

Soon after Britney Spears performed at the Bambi awards and people accused her of copying Madonna.

This is all apart of the ritual, you guys. Britney is now the Queen.
Listen to the intro to her song "Kill The Lights".

Britney has been going around wearing the top hat everywhere. I realize how ridiculous this all sounds but these rituals are taking place and A LOT of people are starting to catch on it. Just look at the videos on youtube and different articles being written. Madonna is rumored to be appearing on Britnet's upcoming tour so expect the ritual to continue.